I’m still working on the green blouse to match my dress and it’s taking way longer than I expected for two reasons: 1) it’s too friggen hot; and 2) I’ve had to rework some of it because my brilliant plan didn’t pan out.

Since Monday, we’ve been having a bit of a heat wave. I can’t work without an iron, and doing anything involving heat and steam makes no sense at 100 per cent humidity and a zillion degrees. I also buggered up the bottom of my blouse and wanted to take a couple of days to look at it on the dress form to decide what to do.

As you may have read, this is the third time I’m making this pattern. The first was the black and white gingham (which was a success after a crap-ton of fitting and tailoring) and the second was the gingham, which didn’t fit. My biggest mistake was mis-judging how the button facing would change the fit. I.E. it wasn’t as big as I thought and the whole things was too small, but I found this out WAY after I had finished, serged and assembled things beyond changing. The shirt was given to a friend.

This time, I basted the facing and THEN tried everything on, so I am significantly more confident about the fit. 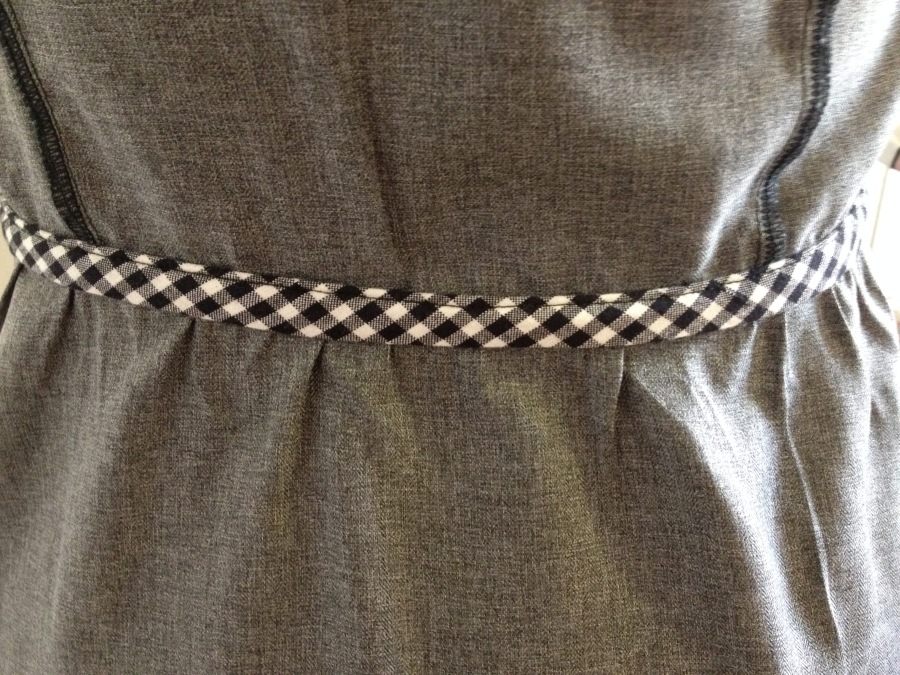 I’m also excited that I got to use my last little bit of gingham bias tape to bind where the bodice and peplum meet. So. Much. Plaid. I love it!

So. Where things went off the rails. My sewing machine was humming along nicely until I got to the point where I had to put the button facing on, meaning I had to figure out them hem.

I had grand visions of doing a scalloped hem and meticulously measured, calculated and plotted my scallops. Two major setbacks caused them not to work. First, I forgot how rounded the bottom edge of this blouse is, which made the scallops near impossible. I basically had to turn up the hem and gather it, which made the underneath look weird.

I bound it with bias tape, which made it look less weird, but it didn’t quite site flat on the outside. And the scale of the scallops were way too big, resulting in them looking like flower petals. The whole thing felt a little Tinker-Bell-goes-to-the-office. Which is definitely not what I was going for.

I opted to cut the whole bottom off and add a panel. I’m right out of the solid green, so I used the plaid, cut on the bias. I did this for two reasons – mainly, I love plaid on the bias, and I knew it would go over the curve better.

I used parchment paper to draft a little pattern. I wouldn’t normally, but I am meticulous about my plaid and I figured, as a contrast piece, it needed to be perfect. I attatched it no problem and finally got to the collar and button facing. It felt nice to get back on track and go back to the instructions with the pattern.

Next up, I’ll be working on the buttons. I received my covered button kit in the mail and am excited to try it out. The ones I got are plastic, which I’m not sure about. All I’ve seen used are metal, but these were cheaper, so I guess we will see. Stay tuned!

One thought on “Trial and Error: getting a little creative”