I have begun sewing maternity wear! I realized that if I was planning on making maternity pants, I probably needed a few maternity tops, too I opted for a Megan Nielsen Maternity pattern as I love her stuff, but decided to not bother with the whole bundle.

The Cara Top is definitely a basic and super duper fast to sew up. It’s also a bit of a scrap buster as I made both of these versions out of scraps. You’ll recognize the white and black pin stripe from my MN River a while ago and the grey is actually from a cut of jersey that was originally meant to be the waistband on a pair of maternity jeggings that did not work out. More on that later.

I made up the black and white stripe first. I chose my size on my measurements at the time (I was probably about 16 weeks pregnant) as the pattern recommends that you use your pre-pregnancy or early second trimester numbers. This meant me cutting a size L and grading to an XL at the hip. This version ended up being a bit looser than I like my knit t-shirts, so for the grey version, I sized down. I find the smaller size fits much better in the shoulder.

This top fits fairly long and can easily be shortened if you are a petite lady. I also found the neckband to be a little longer than it needs to be, causing a bit of a gape at the lowest part of the scoop. Otherwise, I really like this pattern. The hem is slightly curved and the sleeves are just the right length.

I’m quite proud of my second, grey iteration as it involved a good deal of engineering to make it fit on the .75 m I had. I decided to make the front hem curve less extreme and took out some of the extra fabric meant to be rushed over my tummy. I figured the original was more that long enough to deal with a bit of shortening. The tshirt first perfectly right now, but probably wouldn’t accommodate a 9-month belly. I’m not super worried, however, since by that time it will be stinking hot and I will NOT be wearing sleeves.

Other things to note are my hems. You may notice I have decided to ROCK THE ZIG ZAG. Over the last year or two, I have been experimenting with different ways to hem knits. I busted my one double needle testing the hem and decided to just go with a zig zag and make things easy on myself. I still find that a zig zag is the flattest finish and if you are able to match your thread well enough to your fabric, you won’t even see the stitches. 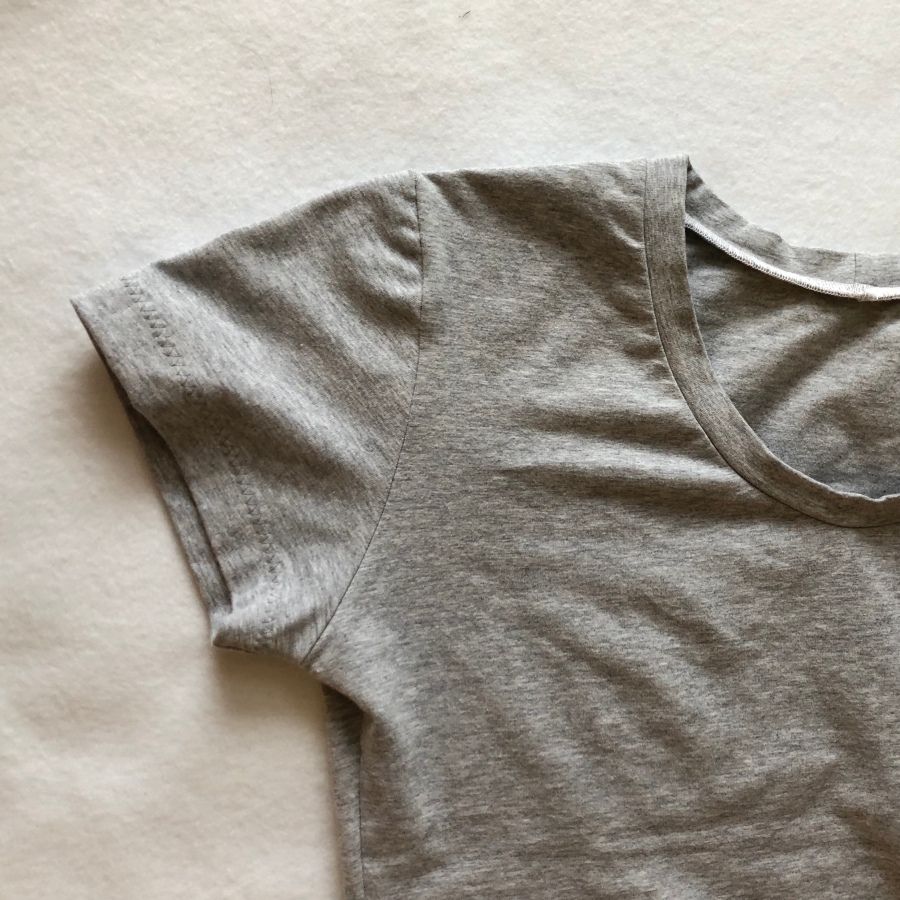 I also finally invested in some wonder tape.  While this stuff is not at all necessary, it makes hemming knits significantly easier. Everything stays exactly where you want it and nothing stretches or distorts. I used to occasionally deal with my hems twisting on curves, but the tape 100 per cent takes care of that.

Both fabrics were purchased at Fabrications.  The black and white is an Art Gallery Knit that I bought probably a year ago and the grey is a basic jersey.

One thought on “Done and Done: The Megan Nielsen Cara Maternity Tshirt”