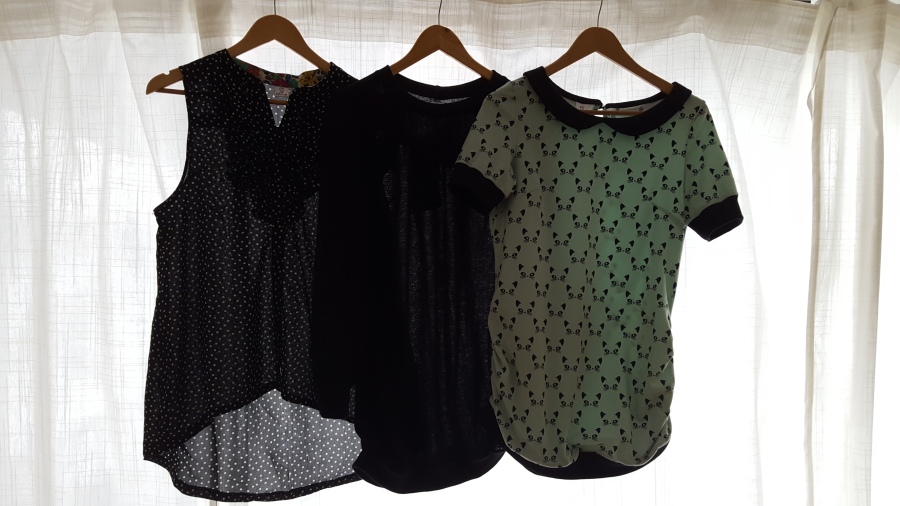 I have found dressing my baby bump extremely difficult. Pretty early on, I grew out of my regular jeans and had to wear jeggings and baggy tops until I was ready to tell people I was pregnant. This was particularly difficult for me as I live in structured clothes (especially in the first few months of the school year as I’m trying to make an impression!) 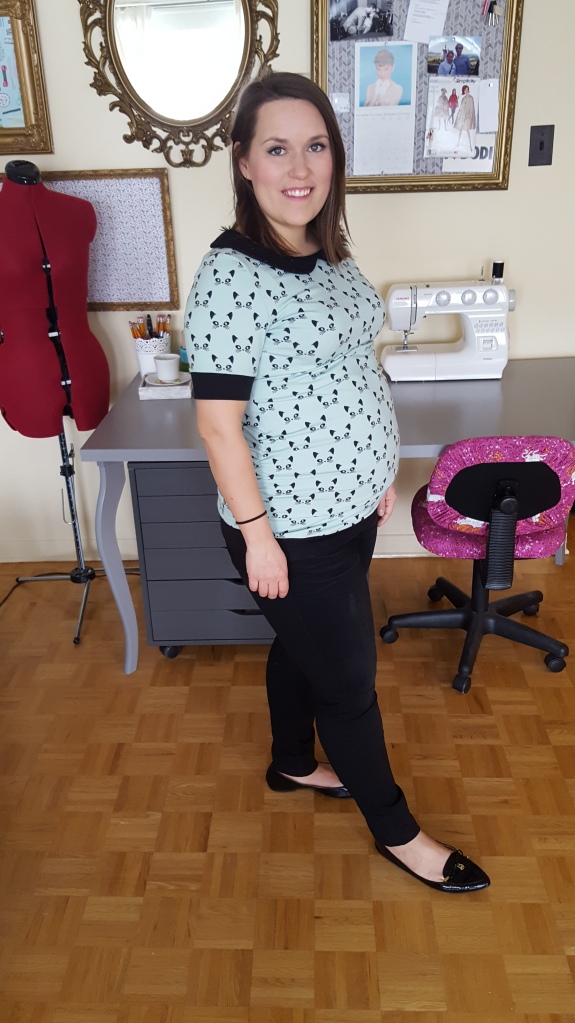 As I finally caved and bought maternity clothes, I was disappointed to learn most maternity gear is super expensive and poorly made with cheap fabric. Needless to say, between crippling morning sickness and awful clothes, it wasn’t until recently that I started to feel like myself again. I made myself three tops (the ruffle blouse, the Kate Spade bow sweater, and the kitty top with a Peter Pan collar) the for work that strike the perfect balance between professional, fun and functional to which I always aspire.

These three tops forced me to look at the few ready-made maternity items I already owned and figure out how to adapt patterns in my stash to accommodate my growing bump. It turns out, it’s pretty easy! 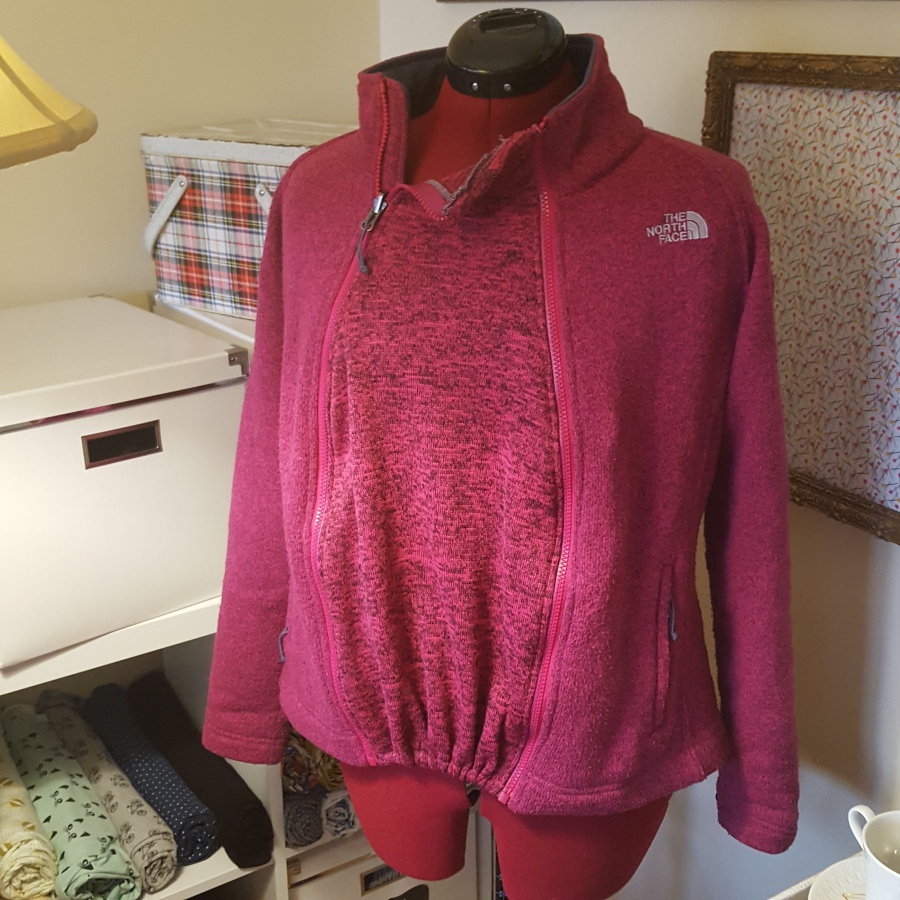 Zip in extenders for outerwear: The first thing I adapted was my snowsuit, by making zip-in panels to extend the belly of my fleece liner and jacket. Here, elastic to hold the extender over the belly is key, as well as creating a rounded hem. The round belly tends to pull the fabric up, so adding 1 to 2 inches of length in the middle helps to keep the extenders down.

Full-bellied blouse: I had already adapted this pattern to be flowier by taking out the waist darts, so all I had to do to this one was add an extra two inches width from the waist down of the pattern (giving me and extra four inches total) and adding an extra two inches length on the front. Again, your belly needs extra length to stay covered! 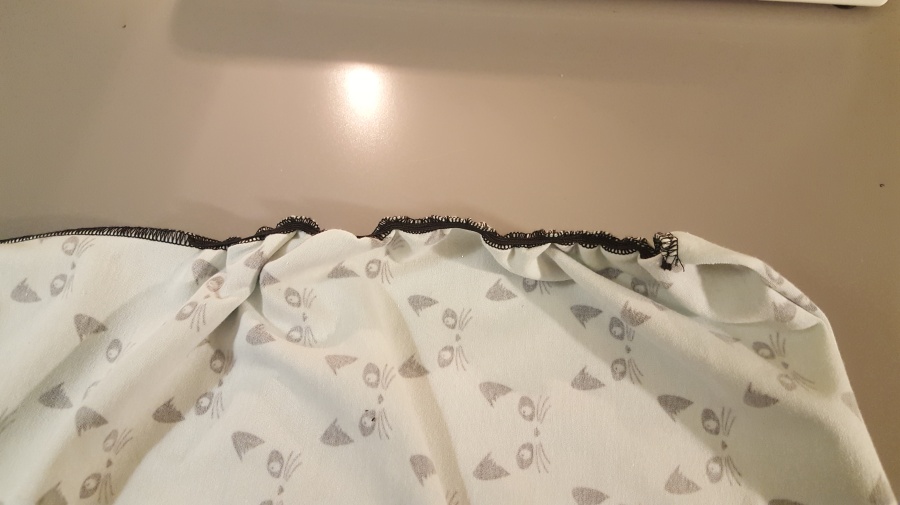 Elastic ruching: I made a sweatshirt and t-shirt with the same pattern and technique I copied from most of the maternity tops I already owned. I simply added a little bit of extra width to the front, made the top longer by 6-8 inches, then used elastic to ruche the sides. The ruching gives tons of room for the bump while not adding bulk (like the flowy maternity tops of yester-year). While this was fairly simple, it took a couple of tries to get it right.

If first tried to feed the elastic into the seam when serging the sides. This didn’t work as the 1/8 inch elastic I had was easily encased in the wrapped-around thread while never being sewn. This resulted in the elastic letting go as soon as it came out of the serger. My second idea was to serge slowly and make sure the elastic was caught under the needle. This proved to be nearly impossible with such skinny, stretchy stuff.

What ended up working best was serging the seam flat, then sewing the elastic on top of the serged seam with a straight stitch, pulling the elastic as much as possible to make sure  got some good gathers. I still had to do this very, very slowly, as the elastic often popped up through the middle slit in my presser foot. I even tried to cover the slit with masking tape to avoid this, but it didn’t work.

I considered using wider elastic, but decided it would add too much bulk to the seam. If I were to make more maternity tops (which I won’t for this pregnancy), I’d try to track down some of that 1/4 inch clear elastic you often see in shoulder seams of stretchy ready-made tops. Live and learn!

When photographing my three maternity tops, I realized they all shared a common feature. Without knowing it, I added detailing to the collar/bust area. When I think about it, it makes sense, as I want to add volume up top (to balance out the voluminous bottom) and bring attention up to my face.

If I get pregnant again, you can bet I’ll spend more time early on making maternity tops I actually like instead of dealing with lacklustre store-bought stuff.

One thought on “Maternity hacking your favourite top patterns”